A Score to Settle – Stanley A. Drajewicz 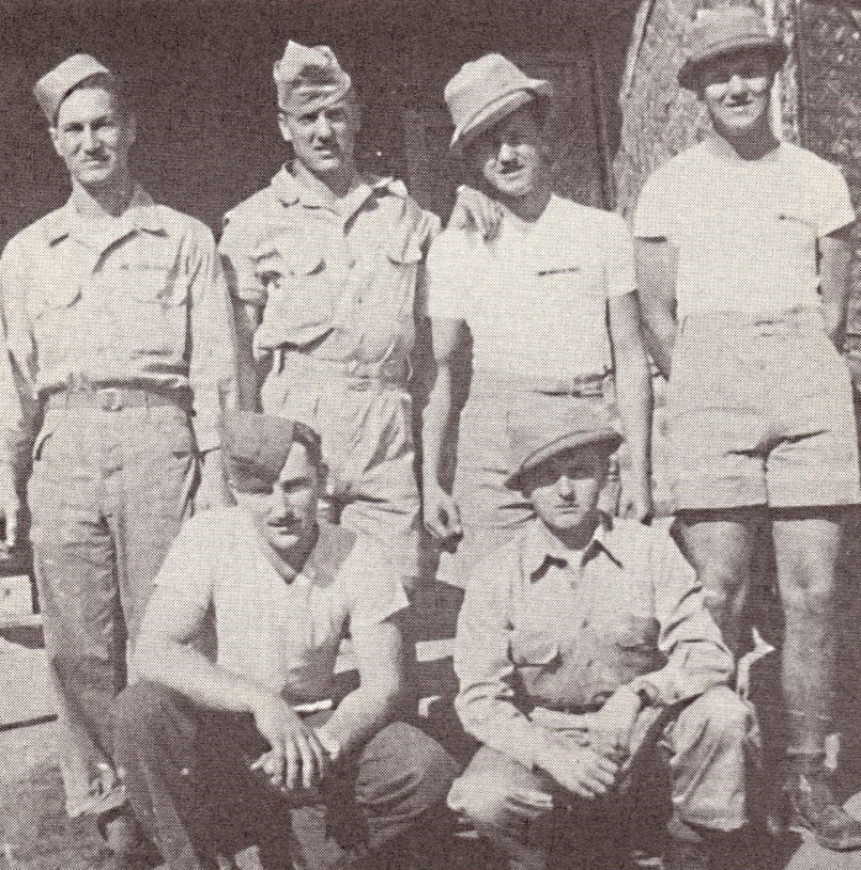 We received this letter from Kaitlin Drajewicz, the granddaughter of Stanley Drajewicz who was a member of the 322nd fighter control squadron and a survivor of the Rohna.  She was going through paperwork and found this typewritten memory of his time before joining the Rohna.

Photo: Somewhere In China: Stanley Drajewicz , bottom right. Survived the Rohna boat sinking by a German missile in the sea off North Africa. He was wounded and was awarded the Purple Heart.

By Technical Sergeant Stanley A. Drajewicz

After spending six glorious months at Bradley Field, Connecticut, the day arrived that I have been anticipating, both with joy and sorrow. My home was located thirty miles from camp and I traveled back and forth daily. Marion and I have been married a little over a year, and shared our little heaven on earth with great joy. The news to her wasn’t exactly surprising., for I explained to her many times that I am subject to call overseas most any day. Marion and I were having such a wonderful time, that little thought was given to the army, and everything in our lives centered just around us two, and most of all, her having her baby.

In the early part of October I left Bradley Field, and arrived at the port of embarkation. My good bye to Marion was without tears, although we both could have burst out, if only one of us weakened. I made out my last will and testament, talked over last minute instructions and tried to make her understand that soon, I would be coming back. After all I had my duty to full fill, and she had nothing to worry about, only her having her baby.

After being processed and out fitted, I marched over with the rest of the soldiers to the docks. Here I was put aboard a newly constructed liberty ship, and was taken to where I was to sleep and eat for the duration of the trip. As I walked in to the main hold, in the center of the ship I was surprised to see so many canvas bunks stretched out over steel frames. Here alone in this hold., approximately five hundred men were to make their home. My bunk was fifth from the bottom, I threw all my equipment on it and went above deck. A brass band appeared on the dock ramp, and began playing. We leaned over the rail, and silently our hearts cried out for the loved ones that we are leaving behind. A loud yell of “chow”, broke up the spell, and we went down to eat our first meal aboard ship.

After the meal was over we heard the ship’s instructions, boat and fire drill. Eventually after looking over the ship, a little tired, we all went to bed. The next morning, we awoke without any trouble at all. We knew we were moving, because our stomachs and the spinning in our heads had got the best of us. A large number of the boys got seasick. I tried violently not to let my stomach over power me, and stayed above deck in the breeze, to overcome my dizziness.

In a couple of days we weathered it out and had a lot of respect for a sailor. The trip across the Atlantic was a great thrill, even greater was the unknown destination that we were headed for. There were all kinds of rumors of where we were headed. First it was England, some said Australia, others just listened to any rumor from anybody that looked impressive. The thought of danger wasn’t in our heads, for we had somewhere in the vicinity of a hundred ships in our convoy, not counting the escorts and the cruisers.

Our first sight of land was the “Rock of Gibraltar”, and the Spanish Morocco. This was our first clue to where we were headed for. Everybody was now asking questions about North Africa. In all we spent 21 days on water and then docked in a nearby port, in North Africa. From there we proceeded to the city of Oran, by truck to our staging area. The first point of interest that we noted, was the Arab. His shaggy appearance and his style of dress. As we road thru the small towns, we waved and hollered, in typical American fashion, but to them we didn’t seem to impress the Arab at all.

We arrived at the city of Oran about eleven o’clock that evening, both tired and sleepy. The packs on our backs seemed to weigh a hundred lbs. Here we received our first taste of soldiering. In complete darkness we had to pitch tents, and make our beds on the cold ground. We selected our buddies and without much discussion, we laid down on our improvised beds. After eating a cold breakfast of vegetable stew out of a can, we were instructed of our new duties, and been explained, that our stay here was temporary, and that shortly we board another troop ship and leave Oran. The next day my buddy Homer, and I went out to hunt up some lumber to make ourselves a bed. Homer was a nickname given him for his actions, and because he came from New Hampshire, a typical farm boy. His real name was Ernest, and sometimes we called him “speed”.

I enjoyed his company very much, because of his true character. He and I were both mechanically inclined, and that more than anything has brought us to a same level. At our first opportunity Homer, and I visited the city of Oran. We first headed for the American Red Cross to find out if I am a father or not. In several days I received a reply, that everything was fine, and that I would be notified as soon as possible. From this day I felt a greater respect for the Red Cross symbol, for I realized the important part they play upon a soldier’s morale.

Our stay in Oran was brief, and in the latter part of November, we boarded His Majesty’s ship the S.S. ___ [HMT Rohna – added by editor] during the night the convoy was formed and silently slipped away in the shadows of the city.