The Story of the USS Pioneer 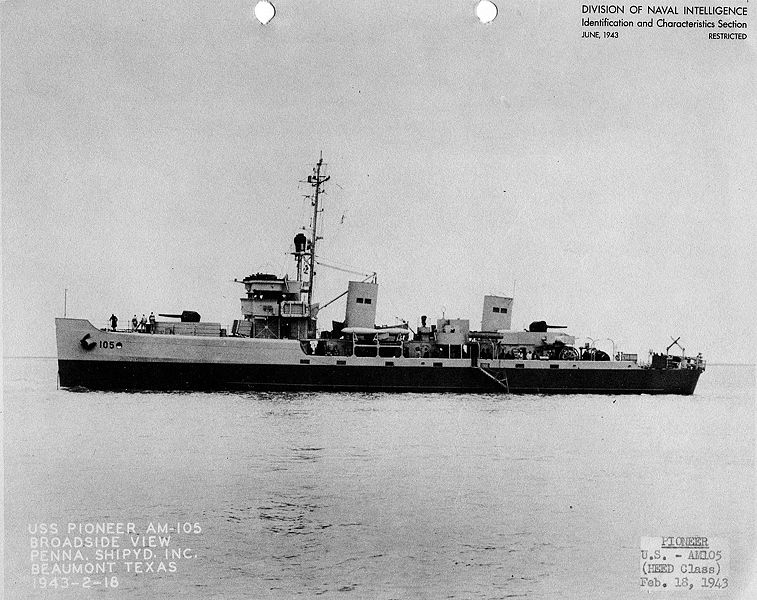 The USS Pioneer and its crew along with four other ships was assigned to sail with Convoy KMF26 to provide protection and rescue service in the event of need.

When they first set sail, it would have been impossible for them to imagine the incredible, historical life saving experience they would undertake; the role they would play, in uncompromising seas, on November 26, 1943 when the Rohna was bombed and sunk.

The daunting task of hauling over 1,000 men from the all-consuming Mediterranean waters to safety was but another dramatic chapter in the unfolding events of the Rohna Disaster.

The five vessels assigned to assist convoy KMF-26 included the USS Pioneer along with the British destroyer HMS Atherstone, Cargo Ship SS Clan Campbell, a British Corvette the HMS Holcombe and a tug called Mindful. Together, they plucked between 850 to 1,000 men from the turbulent Mediterranean waters onto the relative safety of a vessel. The exact number of survivors rescued may never be known since even the total number of people on the Rohna was never exactly known.

But it is clearly known that the crew of the pioneer did extract 606 men from the sea while the Tug Mindful is thought to have brought 220 survivors on board. The rest were rescued by the other three vessels. The cargo ship Clan Campbell with a 30 foot freeboard, in spite of their best efforts was the least suitable for rescue operations, especially for the extremely tired and weakened.

When the Pioneer had taken its human cargo aboard, it returned to Phillipville to deliver them to safety and medical attention. Six passengers died en route. According to some reports the pioneer discontinued its rescue activity due to concern of becoming overloaded. Others, however, believe that the Pioneer was under orders to withdraw and reconnect with the convoy, which had continued on its way.

Accounts of courage and heroism by crew members during their rescue efforts continue to surface even to this day. Some of these acts can be found in the Stories section. Other personal accounts of the rescue effort follow this introduction.

Many survivors have tried tirelessly, though in vain, to win United States Government or Navy recognition or commendation for the Pioneer crew. Unfortunately, their voices fell on deaf ears. On a more positive note, the United State Congress acknowledged their exceptional service with passage of House Concurrent Resolution #408 in October of the year 2000.

At the time of this entry, less than half of the names of the 120 man Pioneer crew have been located for posting and honoring on our web site. With time we are committed and confident we will add to the following roster

This page is dedicated to and to honor the crews of the Pioneer and all the other ships that took part in the rescue. Carlton Jackson, in his book Allied Secret: The Sinking of HMT Rohna, expressed it best:

Carlton Jackson, in his book Allied Secret: The Sinking of HMT Rohna, expressed it best.

“To the personnel of the Pioneer, Holcombe, Atherstone, Mindful, and Clan Campbell must go the greatest accolades that can be given to seafarers. They did not simply rescue many survivors from the Rohna, they proved they were willing to lay down their lives for their fellow man. It is an action that is part of the best tradition of sailors everywhere.”

And Later That Day Another Entry In Operational Remarks (War Diary)