Ruth Canney was both the heart and the strength of TRSMA. Along with her husband, John Canney, and their friends Jim and Charlotte Clonts, she put together the very first gathering of survivors of the HMT (His Majesty’s Troopship) Rohna and other ships in the convoy in 1993.  When it was well attended, they decided to continue them on an intermittent basis, holding a few more between 1993 and 1998.  At that point Linda Irvin (and her company, the Reunion BRAT) was hired to produce the reunions on a yearly basis.  Ruth became ‘Mom’ to Linda, as she did to my sister Debbi and me when we took over producing from Linda. It was an honor that was particularly sweet when her actual daughter, Jane Canney Downing, gave us her blessing one year to be Ruth’s ‘official Rohna daughters’.

From the very beginning, Ruth Canney was a driving force in getting survivors, their families and families of casualties of the sinking of the Rohna to the reunions.  She documented every single reunion and created the largest, most comprehensive physical archive of news clippings that exists into very large scrapbooks that were carried from reunion to reunion over the years.

After her husband, John, passed away, Ruth’s commitment to keeping the reunions happening never wavered.  Her energy was unflagging.  Originally she held the position of ‘Director Emeritus’ (as did John Fievet), but then became a Board Member as well as creator of the reunions.  Many of the men and their families who attended over the years became friends with her and she watched with delight as the children and grandchildren returned and continued to take part in celebrating the lives and legacy of the men of the Rohna as well as their KMF 26 Convoy-mates from the Pioneer, the Rajula, the Karoa, the Egra and the Banfora.

Every producer of the event relied on Ruth’s letter to the members that invited folks to attend that year’s festivities and she was dogged in her search for new families of survivors and casualties.  She wanted as many as possible to know what happened to their loved ones on that day. She never wavered from that desire; it was her calling and her focus. Everyone who ever attended a business meeting where the membership nominated and voted on the location for the following year’s reunion will remember that she had only one location to nominate: West Jefferson, Ohio. She never wavered about that, either.

Ruth’s love and commitment to her family was legendary. As the years marched on, the Canney family attendance at TRSMA reunions grew until a small village of Canney’s was gathered at the Saturday night Banquet and Presentation. Surrounded by her children, grandchildren and great-grandchildren, her pride was evident and love shone brightly.

Ruth’s dedication to TRSMA lives on as both her son, Jim, and grandson, James, are current members of the Board of Directors. Her legacy is evident everywhere: her family, her Church, her TRSMA fellowship and actions.  As a true member of the Greatest Generation, her ‘Get It Done’ attitude has touched us all and she leaves us wondering how we will go on without her while knowing that we must.  In her honor, and because she would have it no other way, we must go on and get it done.

Rest in Peace, Ruth. You shall be missed, never forgotten and always loved. 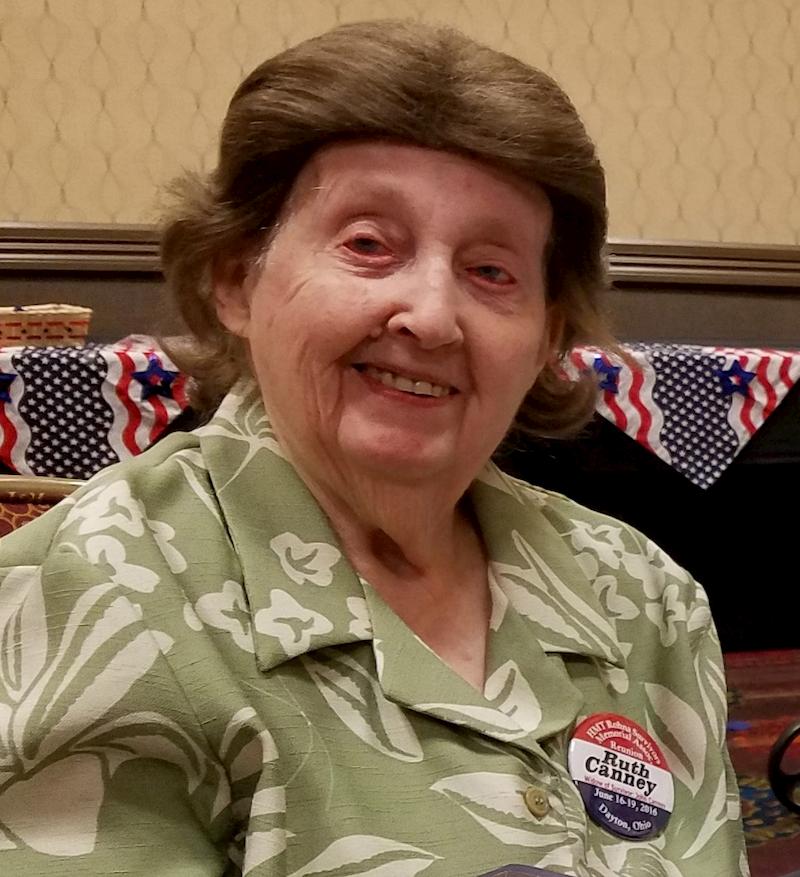